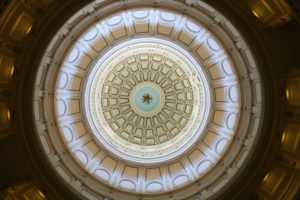 Inside the Texas State Capitol dome. -photo by Elizabeth Hackler

After the tremendous success the Society achieved during the 2011 legislative session, its Government Affairs Steering Committee approved a lower-key approach for the 83rd Regular Session of the Texas Legislature, one focused on ‘Sunset and Sustainability.’

The primary difference affecting architects brought about by HB 1717 is that all licensees must go through a security clearance requiring that a (one-time) fingerprint record be submitted by architects as they either renew their license or become initially licensed. This is something now being required of all professions as they go through the sunset process; it is not a case of architects being singled out for additional scrutiny.

SB 211 gave the Society an opportunity to effect changes to the model Public Private Partnership (P3) law enacted in 2011, and to get into the TFC’s enabling legislation language, calling for more consideration of design standards for future Capitol Complex projects.

The primary sustainability bills impacting architects more directly were SB 198, (Sen. Kirk Watson / Rep. Dawna Dukes), to help ensure the rights of Home Owners Association (HOA) members to xeriscape or otherwise have a drought-resistant, water-conserving lawn without undue restraint, and SB 385 (Sen. John Carona / Rep. Jim Keffer), which has to do with cities and counties being able to help finance improvements for energy and natural resource conservation projects through the PACE (property assessed clean energy) program established in 2009. This session’s bill provides a constitutional mechanism for political subdivisions to authorize assessments funding such improvements.

One practice-related bill was considered a priority measure: HB 586 (Rep. Paul Workman / Sen. Robert Deuell), which relates to waiving the State’s right to claim sovereign immunity for architectural, engineering, or construction breach-of-contract suits. While the collaborative efforts of the design and construction industry didn’t yield parity with similar laws affecting all other political subdivisions, the bill does establish that no state entity can summarily claim immunity from suit simply on the basis of who they are.

There were a number of bills the Society worked on that didn’t pass; some we were mostly neutral on, like SB 617, and some, like HB 3202, we opposed. The former would have licensed Energy Evaluators (or “Auditors”); the latter would have changed the Construction Manager-at-Risk selection process.  We added language exempting architects from SB 617 so that an additional license through TDLR wouldn’t be required. This eliminated our “regulatory confusion” concern, so we took the bill off our “Priority Watch” list.

Future advocacy updates will go into greater detail about these bills and others that TxA tracked this session. If you have specific questions you would like addressed in the meantime, email lobbyist@texasarchitect.org or call me at 512-478-7386.