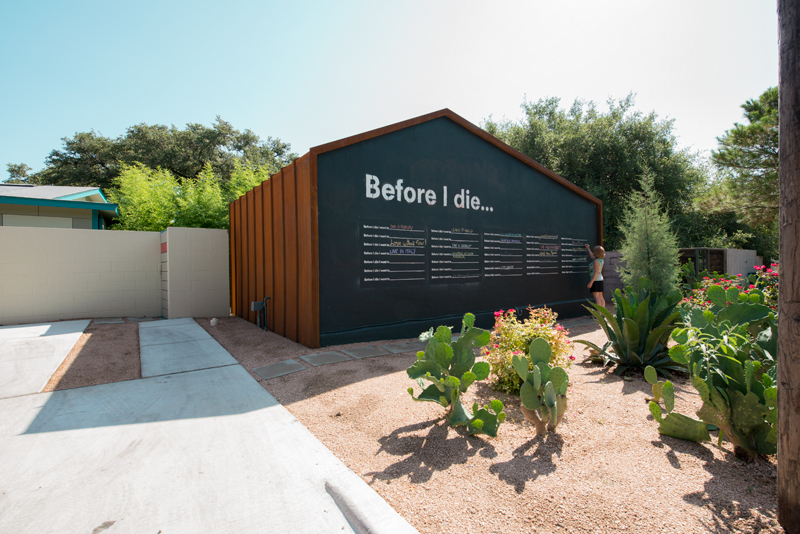 Within Vicki Faust’s growing collection of boutique hotels exists the miniature retreat of the Art Barn. As a stand-alone addition to the Kimber Modern SOCO, the Art Barn remains true to the hotelier’s theme of architectural connectivity to the community through the chalkboard facade treatment displayed on the prominent elevation of the building. – photo by Julie Pizzo Wood​

Vicki Faust and Kimber Cavendish have got it right. As Austin’s hospitality industry reaches skyscraper heights, they’ve established a niche within the industry. Their intimate boutique hotels began with the petite Kimber Modern in the city’s South Congress neighborhood. Designed by Austin-based Baldridge Architects, the hotel was a 2012 Texas Society of Architects Design Award recipient and set a new standard for boutique hotels in the city. Faust and Cavendish recently broke ground on their second venture with Baldridge Architects, the Kimber Modern Rainey, and I took the opportunity to catch up with Faust about the Kimber Modern’s success.

Faust is the first to say that she and Cavendish are relative newcomers to the hospitality industry, but first-hand experience has taught the duo a lot since 2005, when they first approached Burton Baldridge, AIA, about designing their hotel. The South Congress location was challenging, to say the least. But Faust recalls that Baldridge’s proposal quickly stood out amongst the other designs. The building cut into the slope, almost becoming one with the steep topography. “Burton gave us a little bit extra in his design,” says Faust. “It made all the difference in the world. He delivered a livable piece of art.” 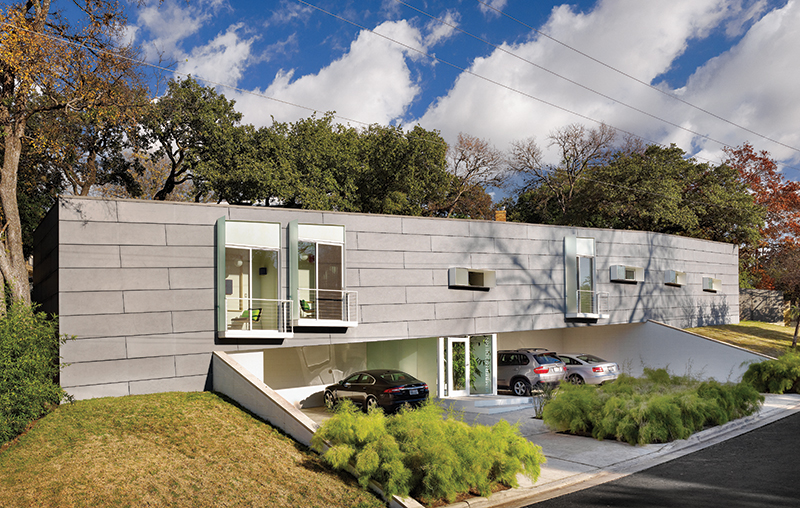 When Faust and Cavendish decided to expand and construct Kimber Modern Rainey, they wanted to maintain the look and feel of their brand while also pushing the design envelope. Baldridge was a natural fit. The four-story, approximately 30-room downtown hotel will be nestled among numerous bars and restaurants and not too far away from other larger hotels under construction. The hope is for the Kimber Modern Rainey, which is programmed with a restaurant, bar, lounge, and pool, to become a neighborhood hot spot. “We wanted another standout building,” says Faust. “We’re not copying anybody. We are creating something completely new.” 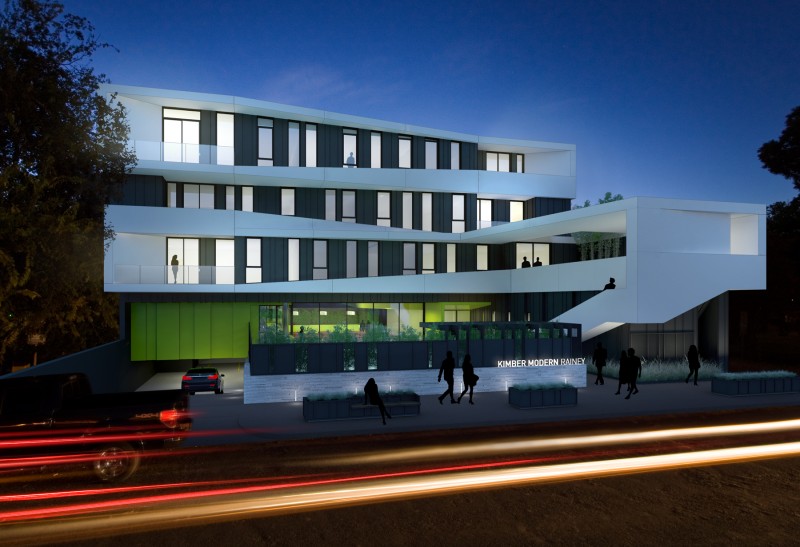 One would think that, between running a successful boutique hotel and managing the construction of another, Faust would have her hands too full for yet another project. Not so. “Kimber jokes that my epitaph will read, “I have an idea!’” jokes Faust, who also made time recently to spearhead a small addition to the Kimber portfolio. The Art Barn is a one-room space designed on the footprint of an 1800s carriage house. Faust collaborated with Austin-based Derik Demerey to create a Corten silhouette of the old structure and then finished the street facade with an art wall featuring New Orleans-based artist Candy Chang’s “Before I Die…” project. The building’s chalkboard facade treatment has transcended the aesthetic dimension to become an active and ever-changing reflection of community participation. 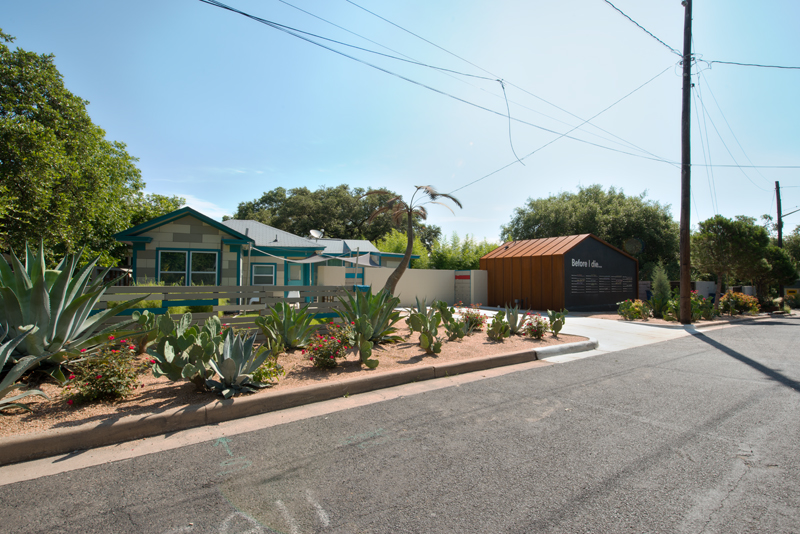 “Several guests have commented that they enjoy hearing the faint sounds of people writing and drawing on the board,” says Faust. “The community and the neighborhood like the interaction.” 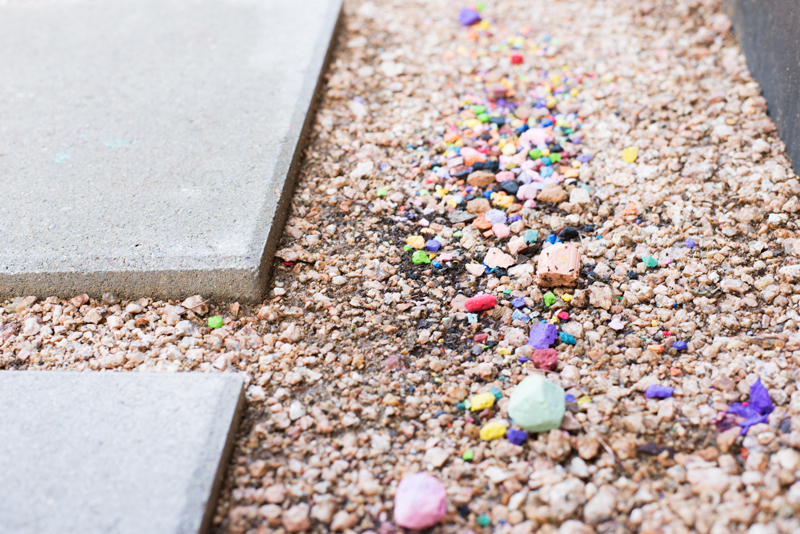 Stray bits and pieces of chalk lay scattered at the base of the Art Barn’s wall. – photo by Julie Pizzo Wood

As lovers of modern design, Faust and Cavendish wanted to be “a part of something bigger.” The pair has definitely accomplished this. Their work is not only contributing to the design conversation in Austin but also setting a high bar to be matched. Their partnership with Baldridge Architects has successfully achieved their aspirations and made them really happy in the process. “I find absolute joy and wonderment everyday as I walk into the courtyard of the Kimber Modern,” says Faust.

Charlotte Friedley is the communications specialist for the Texas Society of Architects.

This article is online content for the July/August 2014 issue of Texas Architect.